2001: Existing Zoning Bylaw. The map below shows areas of public and recreational land use (represented by the dots), and rural use (represented by the diagonal lines) interspersed with blocks of residential housing. While Bowen’s land has been used for residences since settlers first began coming to the island in the late 1800’s, the focus on land for public use is interesting considering Bowen’s history of ownership by various companies and private landowners. 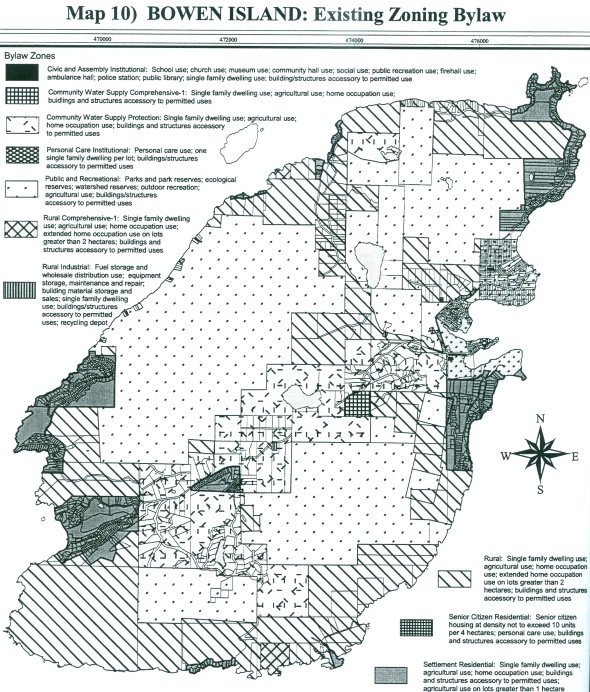 1978: Snug Cove Plan of Existing Landuse. The major themes of land use change on Bowen Island are captured in this image of Snug Cove. The Collins Farm (still present today) provides a link to the early farming and pioneering days, while the old hotl site is marked. Residential and commmerical land use dominate the areas closest to the ferry, and Crippen Park has yet to be taken into account. 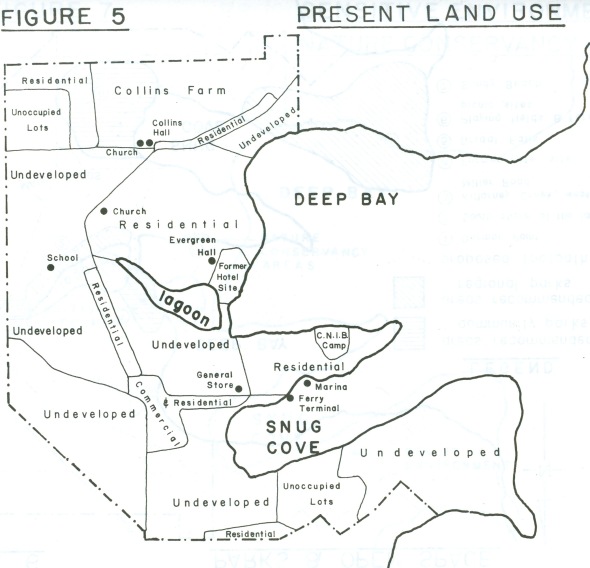 Below left, 1968: Plot Map of Tunstall Bay Lot Developments. Below right, 1974: Aerial View of Bluewater, Bowen Bay and Tunstall Bay. Although Bluewater was developed in the 1950’s, Tunstall Bay wasn’t subdivided until 1969, when Dee Cee Projects planned residential, condos and commercial lots for the area. Like other neighborhoods on Bowen, the plan was for community amenities (tennis courts, a pool etc.) to be for members only. In the aerial view below, the roads leading into the subdivision can be clearly seen.

c. 1960: General Land Use and Zoning. Four categories of land use are shown here: residential, commercial, industrial and rural. This map highlights the transition from resource extraction/industrial land use that dominated Bowen’s early history to a largely residential/rural island with developed blocks of neighborhoods: Hood Point, Miller’s Landing/Scarbourough/Eaglecliff/Deep Bay/Snug Cove, Mt. Gardner Park, and Bowen Bay/Tunstall Bay/Bluewater, and Cowan’s Point. Here, only a few small tracts of land show industrial land use (indicated by the darker red colour) are shown, while rural (white) and residential (yellow) dominate the map. 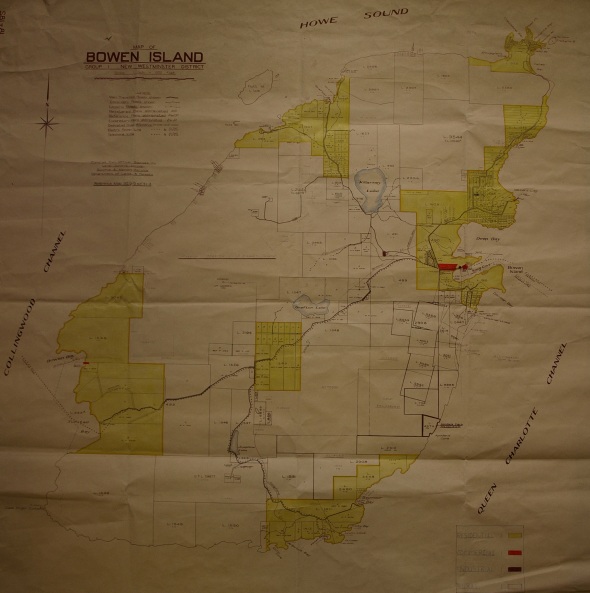 Pre 1969: Blueprint of Bowen Island, including

Bottom left, 1962: Plan of Subdivision of District Lot 490 between Snug Cove and Deep Bay. Top left, 1962: Aerial View of Snug Cove and Deep Bay, showing major changes. Bottom right, 1963: Subdivision Plan of District Lot 1628 and 49 at Miller’s Landing. Top right, 1962: Aerial View of Miller’s Landing. The year 1962 saw a major transition in land use, when the Union Steamship Company put their Snug Point subdivision on the market, thus drawing to a close the booming resort industry. The 17 acres between Snug Cove and Deep Bay, where the dance pavilion, bandstand, tearoom and picnic ground were was sectioned into private residences. Along the south side of Deep Bay, one lot along the beach was saved for public access (today, Sandy Beach) and one was bought by the the CNIB camp (open 1963). The Deep Bay and Miller’s Landing subdivision occured in 1964, occupying the land where the number 3 picnic grounds were. The bottom left aerial view shows the store in the original site, the Lower Dance Hall still there and the new CNIB lodge. The inside wing of the original steamer dock is gone, as is the hotel, but three of five tennis courts at the resort still remain, as do Evergreen Hall and the Men’s Dorm. The passenger ferry dock and log booms can be seen in Snug Cove. 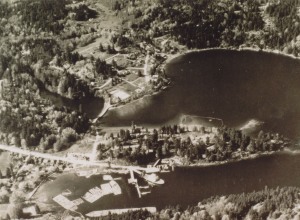 Below left, 1950’s: Evergreen Park Resort. Below right, 1959: Aerial View of Snug Cove and Deep Bay. The resort business was still going strong at the end of the 1940’s, with Evergreen Park Resort as the destination. However, the Union Steamship Company began to restrict access to the hotel and grounds, picnic tables were taken from the picnic grounds, and the dance hall was closed. In 1957, Evergreen Resort closed, although 180 cottages were still available for rent from the estate. In 1962, the hotel was demolished, and most cottages fell into abandon, especially on the north side of government road. The advent of the car during this time meant that people wanted to travel further afield for holidays; Bowen Island’s land was no longer the ultimate paradise, although of course, many on-foot tourists still visit today. In the aerial view, the picnic grounds and resort are still visible, and most of the private lots and buildings seen today are not there (Miller’s Landing, Cates Hill, etc.) In contrast to previous photo’s, Snug Cove has been dredged by this time. 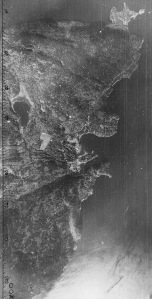 c. 1950: Landscape of Mt. Gardner and surrounding area. Forestry has been a relatively continuous use of the land since Bowen Island was first ‘discovered’ by settlers of European descent. Here, the effects on the landscape of logging can clearly be seen. Killarney and Grafton Lakes can be seen, as well as a farm in the bottom right-hand corner of the image. 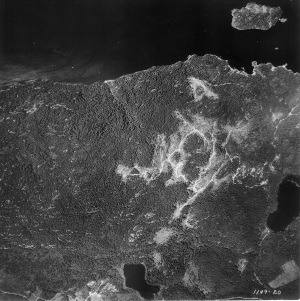 Below left, 1947: Bowen Island. Below right, 1949: Map of Bowen Island, New Westminster District. The New Wesminster map of Bowen’s legend shows logging roads, as well as power and telephone lines. Distinct neighborhoods of denser lots and residences can be seen at Cowan’s Point, Hood point, Mt. Gardner Park, and mid-island, although notice that Bluewater is in the early stages of subdivision, while Tunstall Bay has not yet been subdivided. Small lots are shown directly north of Mt Gardner’s summit, but the most populated part of the island is still the east coast closest to the boat access from Vancouver. There are still many large lots shown, particularly at Cape Roger Curtis and where the Ecological Reserve is today. 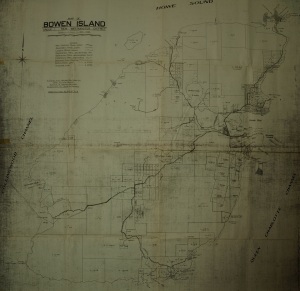 What is Map Bowen History?

Map Bowen History uses a selection of images from the Bowen Island Museum and Archives to show how Bowen Island’s physical landscape has been used throughout history. Scroll through the posts to go back in time, or choose from the categories below and skip right to what interests you. To learn more about this project, go to the About Map Bowen History page at the top of the screen. This is an ongoing project - the idea is to have members of the Bowen Island community help fill in the gaps in the timeline. Anyone interested in adding to the project can comment, or contact me at s.ravensbergen@gmail.com. Thanks for taking the time to stop at Map Bowen History!